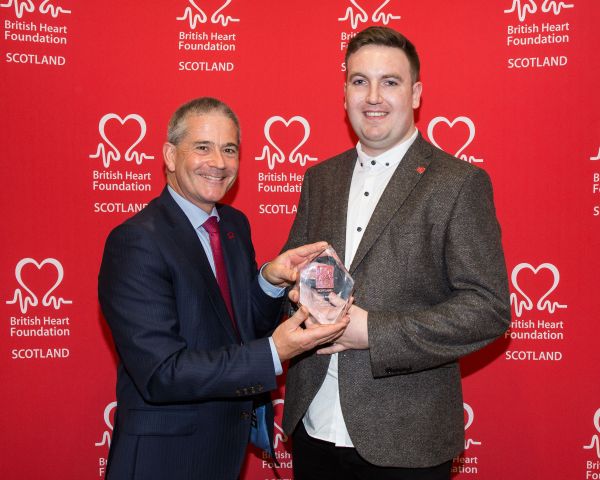 Ross Peters from Dundee has been named a Heart Hero by British Heart Foundation (BHF) Scotland for raising awareness of inherited heart conditions.

Ross, a patient of the Scottish Advanced Heart Failure Service at the Golden Jubilee National Hospital, picked up the Heart Hero Award in the Inspiration category at a ceremony at BHF Scotland’s Annual Supporter Conference at the University of Edinburgh.

At the age of 21, after beginning to feel unwell while on holiday with friends, Ross’ condition rapidly deteriorated until he was admitted to hospital, struggling to breath. Ross was diagnosed with an inherited heart condition and will now  need a heart transplant.

Ross, now 23,  said: “When I was first diagnosed I remember thinking that everyone in the literature and information I was given seemed to be older, but here I am at 21 with the same condition, waiting on a new heart. If my story can help someone else in the same situation  by helping them gain a better understanding, or help them cope by realising they’re not alone then that’s what I want to do.

“I'm delighted for everyone who won at the BHF Scotland event and I'm so honoured to win such a special award. To get engaged, have my engagement party, and win a fantastic trophy in such a short space of time is really humbling for me and I really appreciate everyone who voted for me and the amount of support my family and I have received.”

James Cant, Director at BHF Scotland, said: “Ross and his family have turned his diagnosis into a force for good and his award recognises the extraordinary contribution he has made in raising awareness of BHF Scotland’s work. Without people like Ross, we wouldn’t be able to fund life saving research.”

“Ross’ story is a truly inspirational one, helping people to realise that they are not alone, that this could happen to anyone, and realising the importance of getting to your GP and getting checked out if you have any worries or concerns at all.”

BHF Scotland’s Heart Hero Awards recognise and celebrate the exceptional contribution of individuals and groups who are fighting for every heartbeat in Scotland, such as heart patients who are campaigning for better services, fundraisers who are raising vital money to fund life saving heart research, funded scientists and health professionals.