Sisters’ bond is straight from the heart 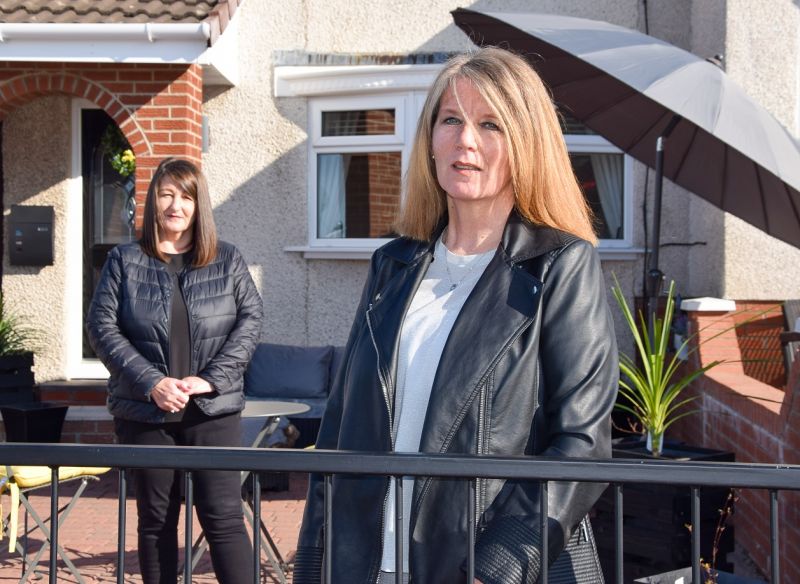 Two shielding sisters have been supporting each other more than normal throughout the COVID-19 pandemic – one has received a life-saving heart transplant while the other is on the waiting list for one.

Allison Kerr and Karen Owens have been inseparable all their lives, providing a lifeline to one another since lockdown last year.

Diagnosed with a congenital condition – familial dilated cardiomyopathy – which sadly led to the death of their father in 2005, the pair have been forced to shield during coronavirus restrictions.

Before their heart troubles began, the intrepid Lanarkshire pair were known for embarking on gruelling challenges in the name of charity.

Raising money for St Andrews Hospice in Airdrie where Allison worked as an administration clerk, the duo took on 5k and 10k runs, climbing the Bens of Scotland, the Mournes of Northern Ireland and the Canadian Rockies.

While they may not be physically scaling any peaks at the moment, mentally they are doing this each day, supporting each other to stay positive and keeping each other’s hopes up.

Big sister Karen, from Airdrie, was diagnosed with the heart condition in 2008 and had a defibrillator fitted four years ago.

She was then told in November last year she will need a transplant to survive.

Karen is now on the transplant waiting list in the care of the Scottish National Advanced Heart Failure Service (SNAHFS) at NHS Golden Jubilee in Clydebank.

The 57-year-old is hoping her chances of receiving a new heart will increase under the new opt out system which came into effect in Scotland, aimed at boosting the number of organs available for transplant.

Karen said: “I saw how Allison had deteriorated in the year before she received her transplant. I think I knew it was inevitable it was going to happen to me after the journey she had.

“You try to put it to the back of your mind because you don’t want it to be true, but you know deep down it’s inevitable.

“When you lie down in your bed and you can hear your heart beating sometimes, when mine skips a beat, which it does due to the condition we have, I pray to get a new heart.

“But then I stop myself and think I’m being selfish because someone will die to give me a heart. It’s mixed emotions.”

Allison said: “I went from being told I was getting a defibrillator on my 40th birthday to being told I needed a transplant on my 50th.

“But with my new heart I now have my 60th birthday to look forward to. Without it I simply wouldn’t be here and I have so many people to thank for that, not least my donor.

“It’s really mind-blowing being told you need a new heart. My dad was ill from a young age and he died when he was 61 in 2005.

“We had no idea at that point there would be anything wrong with us. Our younger twin brothers are unaffected by it.

“Having a transplant is so life-changing, it’s really hard to put into words. It’s overwhelming to think that someone would actually give me their heart so that I can have a chance of living when they have died.

“They will never know how grateful my family and I are for what they have done.”

Despite their health and shielding restrictions, the pair have remained positive and upbeat and are most looking forward to spending time with the whole family when restrictions allow.

Allison has two stepsons and three grandchildren, who she has not been able to see properly for 16 months.

She said: “It’s awful, but as long as we’re all safe that’s the main thing.

“My husband has completely shielded with me as well and sometimes the boys come to the door with the grandkids, but just to be able to hug them again will be amazing.

“Karen and I see each other nearly every single day, staying ‘two Alsatians apart’ as we say.

“We’re very close, people say we should have been the twins because we’re joined at the hip.”

Karen said: “Shielding has been really tough and my allotment has been my saving grace in terms of getting out because at the start of lockdown I was really scared.

“I’m out in the fresh air there which is a big plus, it’s good for my mental health, but it has been a tough time in every way.

“When Allison got her transplant I was part of her care, I was there all the time, but from 12 March I haven’t touched her.

“We do go shopping together but we’re like socially-distanced snipers in the supermarket, peering round aisles to make sure it’s empty before we make our way down it.

“We’re terrified, so we haven’t had any physical contact or went near anyone since March, which has been hard, but it’s the same for everyone isn’t it so we can’t complain.”

NHS Golden Jubilee Consultant Transplant Cardiologist Dr Jane Cannon said: “The laws regarding organ and tissue donation in Scotland have now changed. From now on, the presumption will be that people have given their consent for their organs and tissues to be donated after their death, unless they have stated otherwise to their next of kin or recorded their objection.

“People still have that choice to make and it is important to discuss this issue with your family and friends so that your wishes regarding organ donation are known. This could be very important if something unexpected were to happen to you and allows your wishes to be respected.

“It is estimated approximately 500 patients are on the organ waiting list in Scotland at any one time and unfortunately some of those patients do not survive until the time that the suitable donor organ becomes available.

“The aim of this change in law is therefore to increase the availability of donor organs and save the lives of more patients who need a vital transplant.

“To see people, like Allison - who have been seriously ill - receive the gift of life and go home to their families, is always the end goal – and is the most rewarding part of the job.

“This is all thanks to organ donors whose humanity and selflessness makes this possible.”

The sisters are hoping that one day they’ll be able to return to climbing the hills of Scotland together.

Allison added: “I hope my sister can have the same gift of life that I have been given.

“I often say to my husband William that I cannot believe that I’m alive, but not with the heart I was born with. Life should never be taken for granted.”

Information on opt out organ donation

The law has changed to introduce a new system of deemed authorisation. This is often referred to as an opt out system.

This means that if you have not opted out when you die, the law allows for the donation of certain organs and tissue for transplantation.

This does not apply if you are in an excluded group or it has been established that this would be against your views.

You can still choose to register to be an organ and tissue donor. By doing this it can make it easier for your loved ones to honour your decision after your death.

The opt out system will only apply to the donation of commonly transplanted parts of the body such as kidneys, heart, lungs, liver, tendons.

The clearest way to record your decision is on the NHS Organ Donor Register and you can do this either online or by phone.

The law change will apply to most adults who are resident in Scotland, however it will not apply to these groups:

If a person in one of the excluded groups set out by the law dies in a way that means they could donate, and they haven’t already recorded a donation decision, then their closest family member will be asked whether they wish to authorise donation.