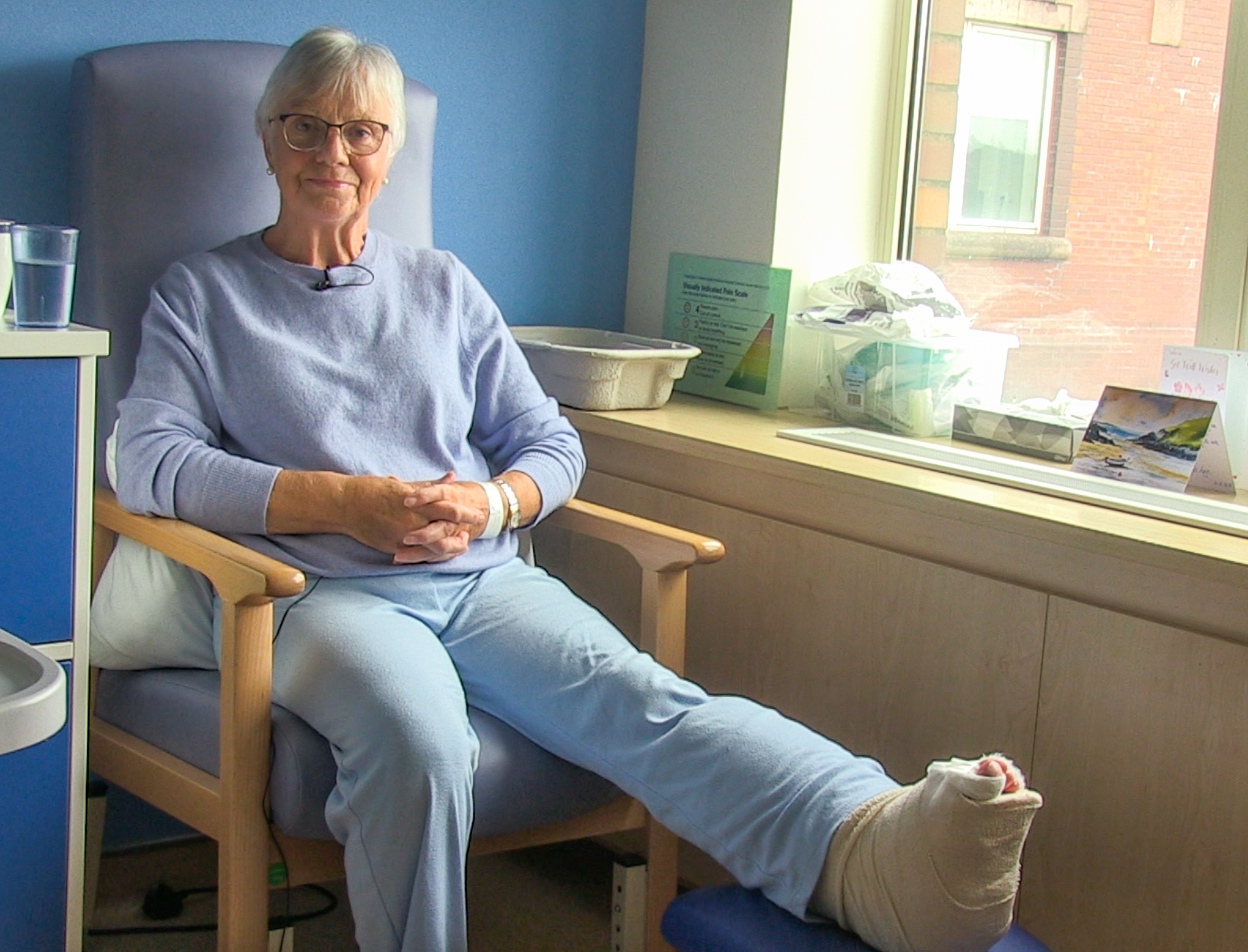 A cancer patient is recovering well after having part of her leg transported for radiation treatment, while she was still on the operating table at a different hospital.

Skilled surgeons and teams from NHS Golden Jubilee and NHS Greater Glasgow & Clyde carried out the rare and complicated procedure on a sarcoma in the patient’s left tibia (shinbone) with the aim of saving her leg and avoiding amputation.

Jan Ritson’s bone was removed and sent on a 20-minute journey to Glasgow’s Beatson West of Scotland Cancer Centre in a sterile container.

Once treated, the bone was re-packaged and brought back to the Golden Jubilee National Hospital, where the team was waiting to insert it back in place.

The procedure would normally have been performed at Glasgow Royal Infirmary, but in April 2020 the sarcoma service was transferred to the Golden Jubilee to ensure the service could continue to treat patients throughout the COVID-19 pandemic.

Collaborating with NHS Golden Jubilee allows NHS Greater Glasgow & Clyde to continue providing a seamless service for West of Scotland patients who require life-saving surgery, with the surgical element of the service carried out at the Golden Jubilee National Hospital by Glasgow Royal Infirmary surgeons.

Claire MacArthur, Director of National Elective Services at NHS Golden Jubilee, said: “We have been collaborating with NHS Greater Glasgow & Clyde since April 2020 to support the continuation of surgery for cancer patients who require urgent treatment during the pandemic.

“A major benefit for both the patients and the service is that the Golden Jubilee has dedicated clinical capacity and has developed green patient pathways to support the continuation of urgent and life critical surgery, minimising risk for cancer patients and minimising delays to their surgery.

“It takes enormous skill, planning and collaboration to do a surgery of this magnitude, even more so at this at this particular moment in time, so everyone involved deserves immense credit.

“The professionalism and collaboration shown by all staff from both Health Boards is exceptional and is an exemplary example of first class person-centred care.”

Due to the severity of the tumour in Mrs Ritson’s lower leg, amputation would have been the simplest option to treat the condition.

However, the clinical teams involved assessed that there was a good chance of saving her leg, despite the added logistical difficulties and limited options with the resection procedure.

Mrs Ritson’s surgery, led by Consultant Orthopaedic Surgeon Ashish Mahendra of Glasgow Royal Infirmary, involved the resection of her left tibia, biological reconstruction through a re-implantation of the bone following extra-corporeal irradiation, transfer of vascularised fibula and nailing for stabilisation.

As well as treating the cancer, the radiation effectively killed the bone, meaning it would no longer receive a blood supply. Clean bone from Mrs Ritson’s fibula was used to bring the tibia back to life.

Mr Mahendra said: “This really was one big team effort by everyone involved and we could not have done this without the teamwork and collaboration when the sarcoma service transferred over to the Golden Jubilee.

“The patient is doing really well so far and is very grateful the cancer is out. She is healing well but has a long road ahead and remains under regular follow-up.”

This was the third cancer diagnosis for Mrs Ritson, who is determined to beat the disease again.

The 71-year-old, from Stewarton, East Ayrshire, said: “I’ve had cancer diagnoses twice in the past and I knew I couldn’t just live with it so I knew something needed to be done, whatever that was.

“I researched Mr Mahendra and was quite happy to put my leg in his hands, as it were, and just get on with the operation.

“It was a little bit daunting, I have to say, knowing that if the operation hadn’t worked out that it would mean an amputation. That really worried me, but I got my head round it and accepted that’s what it was going to be.

“It’s absolutely mind-blowing what they have achieved.

“Mr Mahendra was exceptionally good at helping me along the way, explaining absolutely everything, as well as all the other people on the teams, making contact with me, so I felt I was in very, very good hands and just wanted to get on with it to get this tumour out of my leg.

“So having read about what Mr Mahendra has done in the past, I just felt confident he was going to do the very best for me, and he has done a wonderful job. The care I received by everyone while I was in the Golden Jubilee was also amazing.

“Now that it’s done I feel wonderful and I’m now in the healing process where I have to do a good job too to make me better and whole, maybe get back to some golf at some point hopefully.

“Everything is healing well and going according to plan. Before the operation I hadn’t been able to do much like gardening or anything so just getting back to normal life and not being wheeled about in a chair would be just magic.”