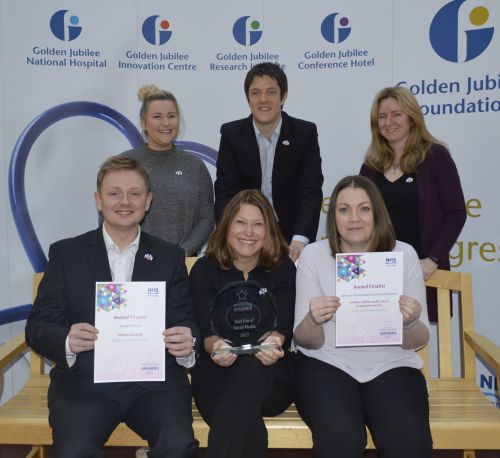 The Golden Jubilee Communications Team has been hailed among the best in Scotland at a top industry awards ceremony.

The NHSScotland Communications Awards recognise talent across nine specialist areas, with the Golden Jubilee finalists in three of the four they were nominated in.

The Golden Jubilee took home the trophy for ‘Best Use of Social Media’ after a judging panel of experts from across the communications industry recognised the reach and engagement achieved by #Heart25.

The #Heart25 campaign aimed to raise awareness of advanced heart failure – the condition which can lead to the need for heart transplantation – and highlight the difficulties faced by the 45,000 patients in Scotland with the condition. It also encouraged participation in an online photo album of people making a heart shaped hand gesture.

More than 30 public figures and celebrities from the worlds of politics, TV, comedy, sport, music and cooking showed us their hearts to raise the profile of the campaign and encourage others to get involved.

The social media campaign reached over 560,000 people with more than 800,000 people ‘engaged’ to like, comment, share and retweet our posts, and our suite of nine patient story films were viewed more than 500,000 times. Our staff and patient event, attended by First Minister Nicola Sturgeon, was even trending on Twitter!

Sandie Scott, Head of Communications and Corporate Affairs, commented: “The #Heart25 campaign was a unique experience, which was delivered on zero budget, with the exception of our time, effort and expertise.

“The team pulled out all the stops to go from concept to launch in just a few weeks and they should be very proud of what they have achieved. As well as receiving extensive national and local media coverage, gaining celebrity endorsement and garnering public engagement, #Heart25 achieved levels of social media engagement and reach which is unprecedented for an in-house team within the NHS.”

The Golden Jubilee Communications team were also finalists in the ‘Best Use of Innovation’ category for their in-house film service, producing more than 100 films in just 18 months. Communications Officer Simon Cassidy was also a Young Achiever of the Year finalist.

Jill Young, Chief Executive, commented: “The Communications team consistently deliver a high quality and constantly evolving service, engaging with increasing numbers of patients and staff every year to keep them informed and engaged.

“The team work round the clock to develop and deliver first class and innovative marketing and communications to support the Golden Jubilee’s vision of leading quality, research and innovation, and I am delighted that this has been recognised by the NHSScotland Communications Awards.”