Bright future for ‘Heart in a Box’ transplant patients this Christmas 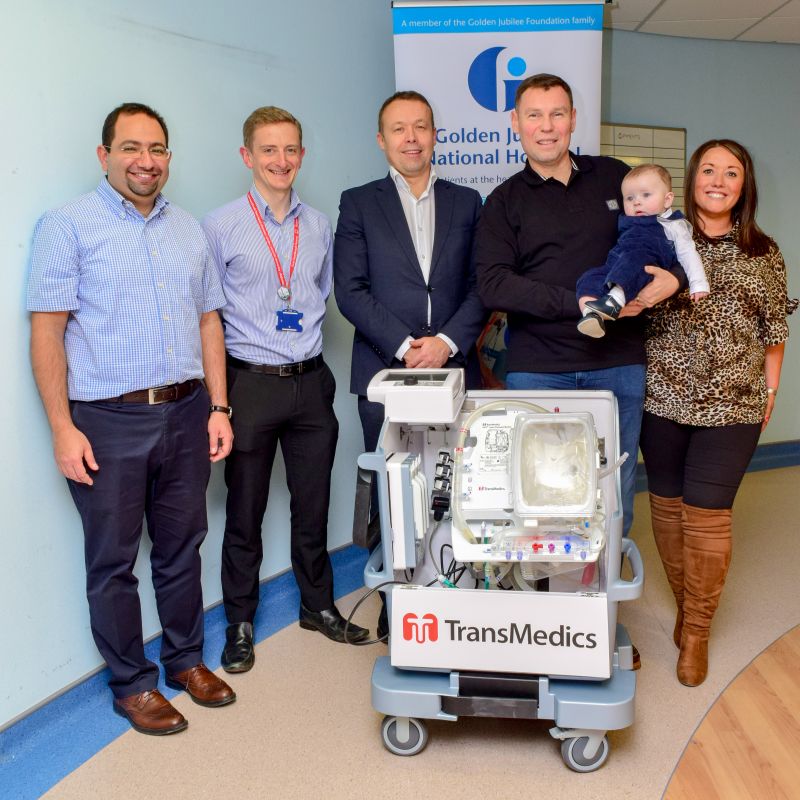 Roger Marr and Julie-Ann Morris were the first people in Scotland to have a heart transplant using the Organ Care System (OCS) earlier this year.

The new technology is the world’s first portable system, which keeps human organs warm and functioning outside of the body.

The OCS extends the amount of time a donated organ can remain outside the body in a condition suitable for transplantation, while giving surgeons the opportunity to assess an organ’s function.

It contains technologies which simulate the conditions of the human body and allows organs to function as they normally do.

Roger, 46, from Prestonpans in East Lothian, an assistant rail construction manager, first went to his GP back in November 2017 where it was first thought he had ‘Australian’ flu – a severe strain of the virus known as H3N2.

It was soon discovered he actually had a viral infection, which eventually caused severe heart failure.

He was admitted to the Golden Jubilee National Hospital the same month where he was told he was seriously ill and needed a heart transplant to survive.

On top of that, while he was in hospital awaiting his transplant, his wife Caroline discovered she was seven weeks pregnant with baby son Rocco, who was born in June.

Roger said: “It was a bit of a shock. It was weird when I was shown my own heart to show me how damaged it was, it looked terrible.

“They weren’t talking about transplant to begin with, but I was deteriorating and that’s when Phil Curry landed at my bedside and told me he thought he could do the transplant.

“I owe so much to the donor, their family and transplant team at the Jubilee, I cannot put into words my gratitude or how I feel. They saved my life and gave me a life with my newborn son, who is now running me ragged.”

“The cardio rehab in Edinburgh can’t believe my progress and say I’m six to eight weeks more advanced than other patients, so I don’t know if that has anything to do with the Heart in a Box.”

Julie-Ann, 41, from Glasgow, was lucky enough to receive her heart transplant through OCS four days after being put on the transplant list, just weeks after Roger.

Julie-Ann was diagnosed with cardiomyopathy when she was in her teens and had two separate defibrillators implanted in her heart in 2006 and 2012.

Julie-Ann, who is a senior insurance underwriter, had lived with her heart problems for most of her life and had even accepted she would probably die young because of it, like other family members before her had.

She gradually started becoming more seriously ill during last year and in December, following a series of tests, Golden Jubilee surgeons came to the conclusion that a heart transplant was the only hope for Julie-Ann.

“I always just lived with cardiomyopathy, as I was physically restricted I sometimes felt I was just existing rather than living.  I have had many affected relatives who have died of sudden cardiac death, so I never really feared death, I just accepted I was likely to die young.

“When they said I could get a transplant, it wasn’t scary, it was quite exciting. I didn’t have long to live when I was admitted and I then knew I was never going to get out of hospital again unless I had a transplant, so you just go for it when it’s offered.

“I think I have always made the most of what I could do rather than dwell on what was physically outwith my reach. This has helped me with my recovery too.

“It’s a slow recovery following the surgery but you see small improvements every week that just make me so excited for the future.

“Now I have a chance to have more of a life than I ever had. Before I was physically unable to walk even short distances, but now I can look forward to a future where I want to climb a Munro.”

Julie-Ann added: “It’s funny getting used to my new heart. It feels like it is racing sometimes, but it’s just a normal heartbeat for anyone else.

“People have commented on how brave and inspiring I’ve been during this time, but that makes me feel embarrassed, the real brave people were my generous donor and their family.

“The real inspirations are the doctors, surgeons and all supporting staff that care for the patients with compassion and respect at the time they are most vulnerable. For me life really is beginning at 40.”

Golden Jubilee transplant surgeon Phil Curry said: “It is a fantastic achievement to have completed two heart transplants this year using the Organ Care System – for the first time in Scotland - with good results for the patients involved.

“Roger and Julie-Ann are both young and were critically ill, but they are now making good progress and I have little doubt that using the OCS helped keep the donors’ hearts in premium condition before transplantation.

“The OCS means that organs can be retrieved from farther away and that we can therefore consider organs which may have been previously rejected.

“Using new technologies that can benefit patients and improve outcomes for them is a major part of what we do and how we work at the Golden Jubilee, to lead on quality, research and innovation.”