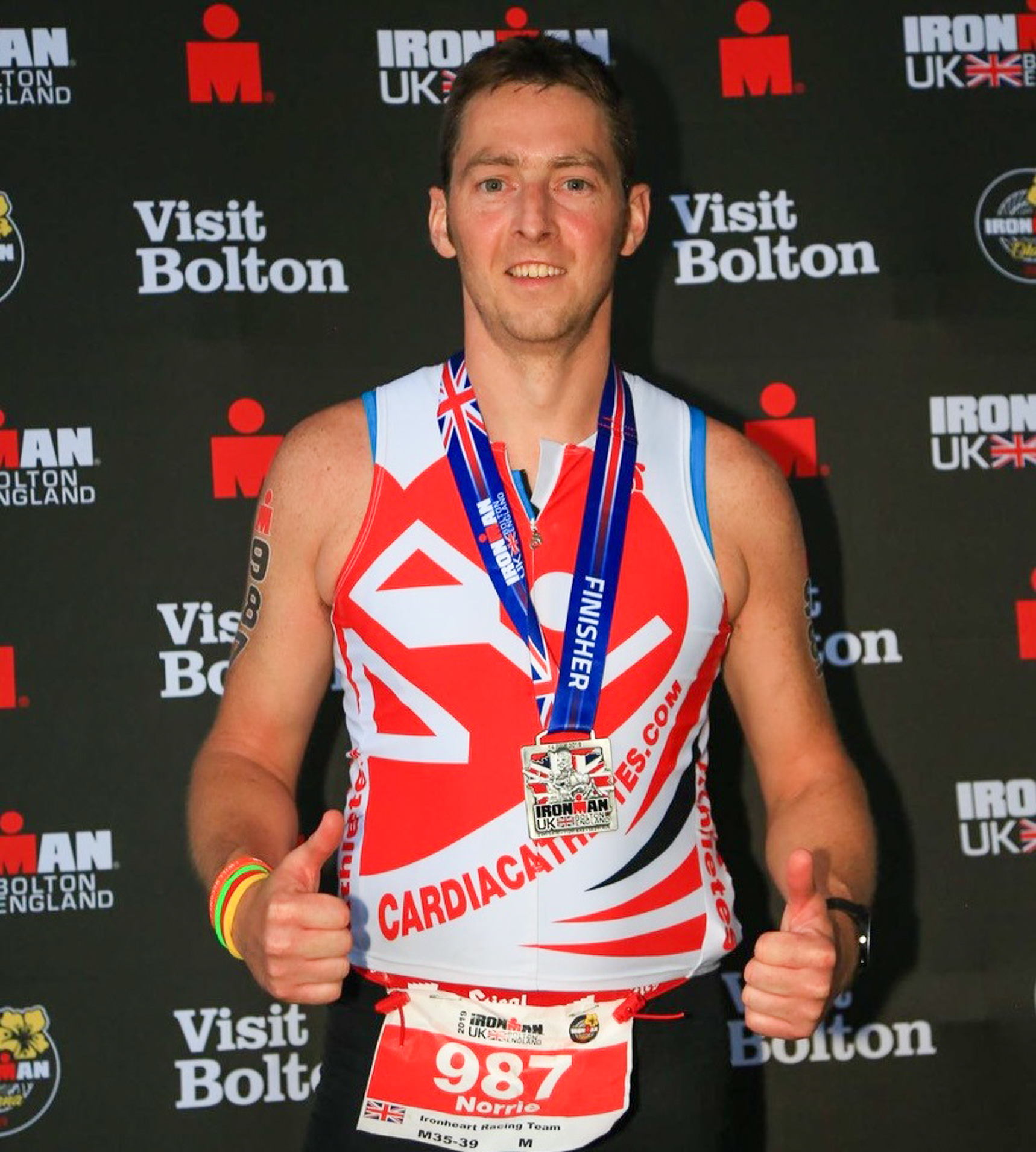 Norrie after his finish at the Bolton Ironman

An Ayrshire man has proven he is made of strong stuff after completing his first Ironman triathlon just 16 months after life-saving heart surgery at the Golden Jubilee National Hospital.

Norrie Hunter, 36, from Symington, South Ayrshire, first found out he may have a congenital heart condition while tending to his unwell mother. Norrie said: “My mum was on her deathbed and she said she believed there was a history of heart problems in the family and she wanted me to get checked out, so I promised her I would.”

Already a seasoned marathon runner, it was during a competition that Norrie experienced breathing difficulties and found it harder to run. Although he finished the race he spoke about it with his wife Rosie and decided to have a check-up.

It was through this process he discovered that he had been born with a Bicuspid Aortic Valve (BAV) leading to an enlarged left ventricle.

A (BAV) is an inherited form of heart disease in which two of the leaflets of the aortic valve fuse during development in the womb resulting in a two-leaflet valve (bicuspid valve) instead of the normal three-leaflet valve (tricuspid). This is something which is commonly not diagnosed until adulthood because the defective valve can function for years without causing any symptoms.

From there he was booked into the Scottish Adult Congenital Cardiac Service (SACCS) at the Golden Jubilee for heart surgery in March 2018. After just six weeks’ recuperation, Norrie decided to start training again and downloaded a fitness app to get going.

Just 16 months later Norrie was able to compete in his first Ironman. One of a series of long-distance triathlon races, the Ironman consists of a 2.4-mile swim, a 112-mile bicycle ride and a marathon 26.22-mile run, raced in that order and without a break.

Norrie added: “It was while recovering in my hospital bed that I was given a book called Operation Ironman. Written by George Mahood, it describes the authors’ journey from the discovery of a cancerous growth wrapped round his spine to competing, four months later, in the Ironman triathlon. It was inspiring.”

“I downloaded the Couch to 5k app and started using that because, although I’d done marathons before, I knew I was going to have to start again.

“I feel like I’ve been given my life back. I’m not quite back to the strength that I was before the operation but I’m still running and I refuse to be defined by a scratch on my chest.”

NHS Golden Jubilee Nurse Practitioner with the SACCS Service, Jim Mearns, said: “I am delighted to hear about Norrie’s achievements. Regaining his fitness and strength so quickly after heart surgery is not only testament to his own strength and determination, but also to the great skill of our own dedicated and caring staff.

“It’s wonderful to hear that once our patients leave the NHS Golden Jubilee National Hospital, they continue to grow in strength.”