Handy Andy raises the bar for the Golden Jubilee 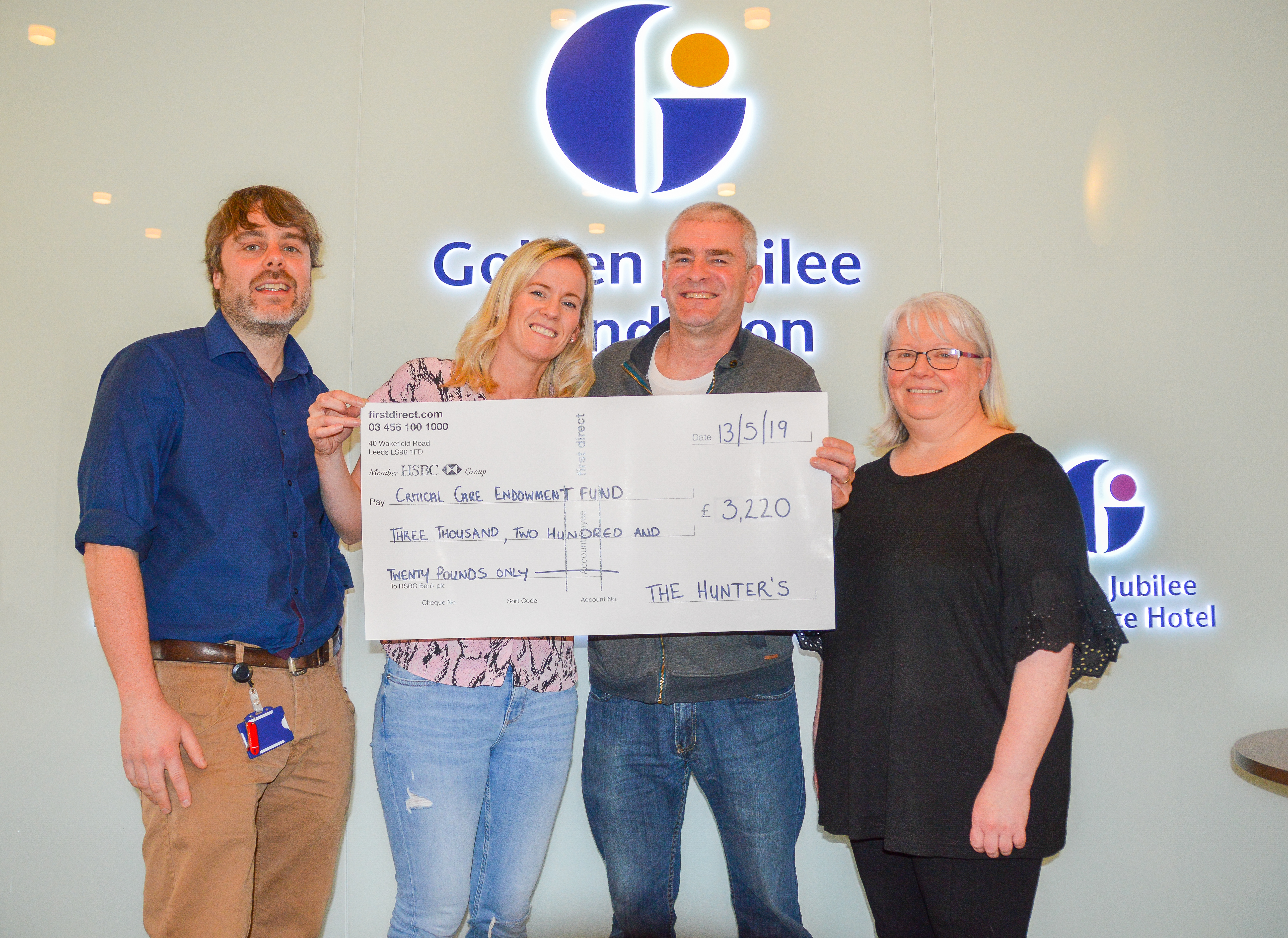 An inspirational joiner who almost died on the operating table returned to the Golden Jubilee National Hospital with a massive cheque to thank staff for saving his life.

Andy Hunter, 57, was having a routine hernia operation in October last year when he took a severe allergic reaction to the anaesthetic and went into anaphylactic shock causing cardiac arrest.

Staff managed to stabilise him using Extracorporeal membrane oxygenation (ECMO) - which provides cardiac and respiratory support when the heart and lungs struggle to - and the joinery supervisor spent three weeks in intensive care in the Clydebank facility.

Miraculously, Andy did not need any form of heart surgery, but his health is still vulnerable and he is receiving aftercare through the Golden Jubilee’s unique InS:PIRE programme (Intensive Care Syndrome: Promoting Independence and Return to Employment).

Due to this specialist care he received at the Golden Jubilee, Andy and his family organised a massive entertainment night at Carrigan’s Blantyre, which was attended by around 150 people including Motherwell and Scotland football legend James McFadden.

The family, including wife Pauline and daughters Lynn, Susan and Gillian, raised a whopping £3220 thanks to the generosity of their guests, friends, community and local and national businesses.

Andy said: “I can’t thank everyone at the Golden Jubilee enough for what they’ve done for me and my family, everyone was just absolutely fantastic and I just wanted to give something back.

“I receive aftercare through the InS:PIRE programme which has really helped me gain firsthand knowledge of everything that happened and I’ve come a long way because of that.”

Daughter Lynn Miller added: “It was a really worrying time for us all because it was so unexpected, but this hospital saved his life. If he wasn’t in here he would probably be dead.

“InS:PIRE has been good for the family as well because it has helped us understand everything a lot better and gives us peace of mind knowing my dad is receiving the best possible care he can get.

“We’d like to thank everyone who came along to the night and who donated such fantastic prizes. We were overwhelmed by everyone’s kindness and are so grateful.”

InS:PIRE was set up three years ago to give specialist care to patients who have spent time in ICU as some can experience extreme difficulties after their hospital stay.

The programme focuses on the social issues and hardships patients may face which traumatic experiences like a heart operation can cause. Difficulties can be physical, psychological or even financial for the patient or their family members.

InS:PIRE aims to give intensive care patients and caregivers best chance of rehabilitation and return to normal life and work through follow-up clinics with health professionals and peer support with other patients who have been through similar experiences.

Charge Nurse Annette Asher said: “InS:PIRE was set up in 2016 to help people who have been in intensive care and dealing with the issues we know face post-ICU discharge.

“Sometimes people think the issues they are going through is only their issue, but at InS:PIRE there might be six other people in the room going through the same thing.

“We’d like to thank Andy, Lynn and the rest of the family for their amazing generosity in raising such a fantastic sum of money for the Golden Jubilee. It’s great to see Andy getting back to health and we will be supporting him as much as we can.”